This post is part of a series outlining the workflow to "Making Media with Remote Collaborators"
In this series we will use  the steps in this workflow to the creation of a Readers Theater project.
In the last post we covered  ORGANIZER - STEP 1:  Build Community Select Your Script.
In this  post we cover  ORGANIZER STEP 2 and 3 : 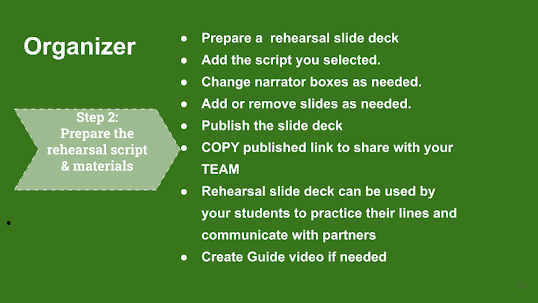 During this step it is important that the organizer, director, and video producer collaborate on some key decisions.


"What methods would work best for actors/singers to record their individual parts.,"

Here are two approaches we considered along with the pros and cons of each option. 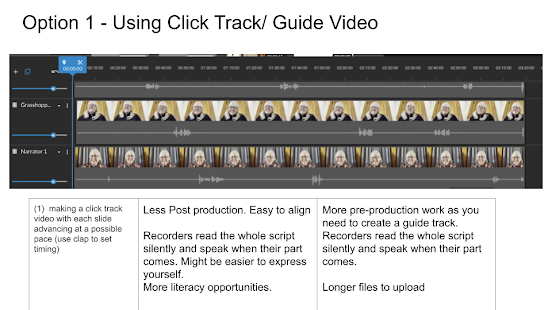 In Option 1, the organizer creates a rehearsal slide deck along with a rehearsal video.  Actors use the rehearsal video when recording their lines. They remain quiet when its not their turn to record, and speak their lines at  the appropriate time during the recording.   This is sometimes called a click track.  Each actor starts by CLAPPING Loudly at the beginning of the video. This clap helps the video producers align the tracks.  This method requires more pre-production work time to create a guide video.  It is the best choice if singers are trying to sing in-sync.  It can also be used for other type of projects such as readers theater.  The pacing of the guide video might be hard to predict.  Readers might read faster or slower.  The video producer can make some manual adjustments to accommodate for slow readers during video production.
Use this template for a Rehearsal Guide.
Create a guide Guide Video like this example for a sample readers theater project.
This method was modeled after the Virtual Choir Guide from Adam and Matt Podd.
Your final outcome might look like this SAMPLE project. 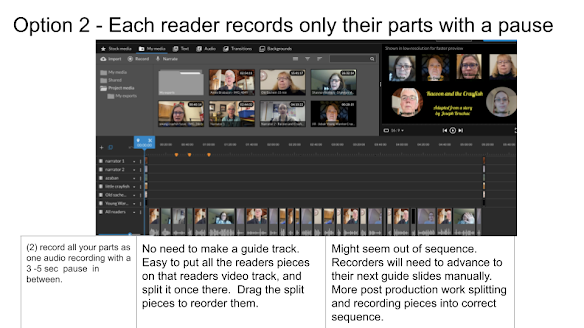 The video producer will import each actors' video on one track, then use the pauses to split and trim the video into segments. Then they will drag each segment to a new video track to reorder the segments.  This will require more post production work, but the pacing will appear more precise.  In this method,  the actors will only be on 'stage' during their lines.

Use this template to create a rehearsal Guide for Option 2.

Here is a sample rehearsal guide

No Guide Video is necessary for this option.

Depending on your teams confidence with tech, it  might also be helpful to  publish the slide deck and COPY published link to share with your TEAM.  This will allow them to  OPEN the published LINK in one tab and to easily advanced the slides manually as needed in full screen view.

This is also super helpful when you are using  the same computer to display the script and to record. 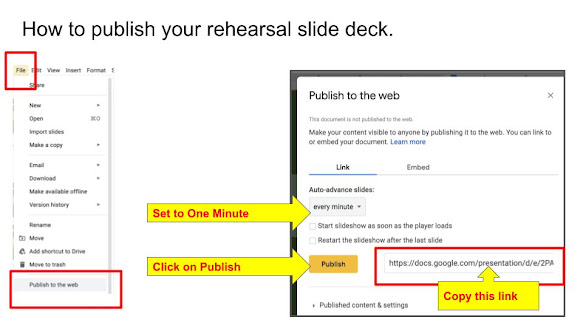 Another consideration that the organizer, director, and video producer must consider is

'What method will you use to collect recordings or media assets from collaborators."

It is also important to Collaborate  with your director and video producers to decide which method(s) will work best for your project.

Here are 3 options starting with the easiest method first.

with Google Drive and all have Google accounts

The method you chose will depend on several factors.
If you and your actors are familiar with Google Drive, this may be the best options.
If some of your actors don't have access to or are unfamiliar with Google Drive, Drop Box makes it soo easy.    You may need to upgrade to the paid version of Drop Box if the recordings will exceed the 2 Gig liitation of the free version.
If your group has access to WeVideo EDU, you might choose to have them record directly in WeVideo.
You might
Stay tuned for the next post where we'll share Step 4  in the organizer's process

Posted by Lucie deLaBruere at 9:35 PM