As we near the end of October, the world around us is filled with Halloween related themes in school, in stores, in communities and even the home.   So why not leverage this time of year for building some creative confidence and foundational skills in creating and making.

I didn't realize where this project would lead -  but I'm pretty happy with where it landed.  By the end of the project I got  to to shake the rust off so many foundational maker skills, I feel a renewed sense of confidence in taking on something new.

Let's start with where we ended up and then take a look on the process and skills learned along the way.

Our Halloween Greeter sat next to the candy dish all night welcoming our our trick or treaters.  The biggest challenge was preventing it from blowing off the picnic table next to BELLA (our bus)  on this windy night.

During the pandemic pause, we dismantled the makerspace in the bus while it was parked for over a year.   When I moved back in on October 15, the only maker supplies left were a drawer full of basic desk supplies (scissors, tape, pens, markers, etc).  This was a good opportunity for a new beginning informed by several years of creating and making in a variety of environments.

So the week before Halloween launched a new inquiry  -- "Where do we begin" in setting up a new mobile maker space.

We began with a trip to Joann's Craft and Fabric to pick up a Cricut Maker 3 and some related supplies.  T 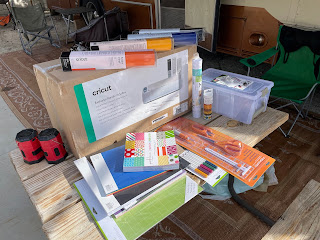 Although th Cricut Maker  does have an option to to purchase a subscription to design images and fonts,  this does not meet my "WHY" for having a  Vinyl/Craft cutter  in my MakerSpace.  My goal is for learners (myself included) to become comfortable with using design tools to create using a variety of fabrication tools.

That requires developing fluency with designing your own vector graphics.  For this I use   Gravit Design. It's powerful and freely accessible to learners - even those on a chromebook.

I also don't believe you have to start from a blank page -  starting with 'clip art' or 'pre designed elements" is a often a launching point to a great design.  For inspiration I use The Noun Project.  I love it so much, I've chosen to purchase a subscription - but it can be used without a subscription as long as you provide attribution.

After selecting and downloading some graphics in SVG format from the The Noun Project, I imported them into Gravit  to manipulate them into a design that might work for my Halloween Project.  I found myself having to use several features of Gravit to create the design I had in mind including "split path", "simplify path", create compound shapes, and manipulating anchor points along a path.

I'm not that well versed with designing with vector software, so this was a welcomed challenge.

After exporting my newly created design from Gravit, I was able to import it into Cricut Design and cut out the parts out of some orange vinyl and green cardstock that I had also picked up from Joann's Craft and Fabric. 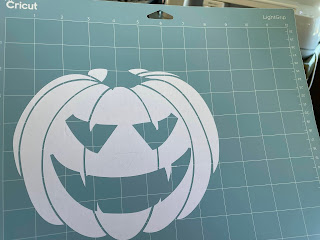 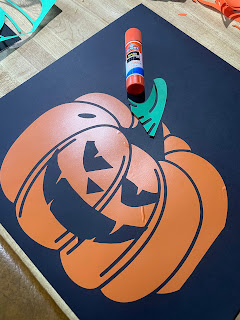 I was feeling pretty pleased with Part 1 of my project.  I had something I was proud of and was motivated to level it up.    Check out Part 2 of our project - which involved a little toy hacking, some circuits, some microbits with code and even a bit of soldering.

New Way to Stay in Touch

Due to some changes  that Google made on the Blogger platform, I've set up a new email subscription service from FOLLOW.IT  for our Create Make Learn Blog.  If you were already a confirmed subscriber of the Create Make Learn Blog, you should continue to get an email when new post are added, however you should  still confirm the new subscription service by clicking on the link in the email.  This will remove the 'reminder" sentence in future emails.

I'm excited about  some new projects and upcoming posts filled with fresh content on the Create Make Learn Blog.  Here's some sneak preview of upcoming post.

Next week we'll focus on  the collaboration features of two fun creative tools as we collaborate on some fun Halloween themed projects with two middle school classrooms.

Can you guess what one of the first maker tool I absolutely needed in my new mobile maker space was and why?  I'll send a special  gift  to anyone who takes a guess in the comments that includes their WHY. 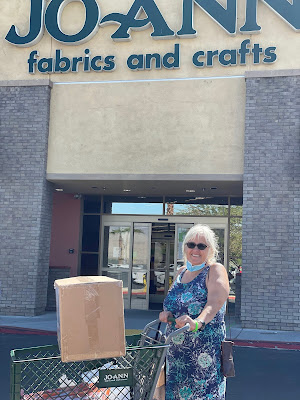 I look forward to lots of  conversations  and examples on"How might we use the pandemic pause to rethink the role of creating and making in our learning spaces -- or the learning that might happen in our maker spaces. "

Lots of fun stuff  in the works!  Hope you'll continue to be part of the Create Make Learn community and confirm your email subscription.

Never miss out on future posts by following us through email.