March is for Making #21 - Learning to Laser Cut Jewelry 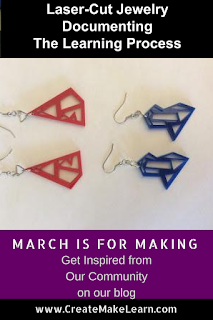 The Project: Jewelry Making with a Laser Cutter

How Might I create a design challenge to create jewelry using the laser cutter and a vector based design program
My goal for my final project for Create Make Learn is to create jewelry using the laser cutter. I will use my creations as a prototype for future student projects. I will be offering a Wearable Arts choice class as one of my 7/8 grade rotations this year. I have been slowly exploring the laser cutter at City School this past year. Under the guidance of Craig Lyndes and Erica Bertucci  both of St. Albans School I am learning to the program Inkscape as the main design source has been a challenge for myself. Having no instruction with this program until this past summer at CML with Sarah Sutter and Caty Wolff was helpful. There is a huge learning curve with this program. I have some experience with Adobe Photoshop but no experience with Adobe Illustrator. After I created this work Roland Wilhelm showed mean online program called Gravit. If seems to be something that is more user and kid friendly. I am anxious to try this program.  I am certainly challenging myself. I came into CML to want to feel more comfortable using the laser cutter. My goal is to create jewelry using the laser cutter. I created 3 different pieces in acrylic. I will also try to use other materials including wood, metals, and materials I am just learning about like bike tires, leather. Here is a photo of the jewelry:

Earrings designed using the vector based program called Inkscape. I designed in Inkscape. I used the Draw Benzier Curves and Straight Line Tool to create both of them.
Vector cutting testing the laser cutter

Success!
I printed both of my earrings on the laser cutter at St. Albans CIty School.

First, I searched for grayscale vector flower drawings that was labled for reuse with modifications. I downloaded the image.

I opened the image in Inkscape and and used the circle tool to draw a circle around the image and also inside the flower in the top petal.

When I attempted to first print the earring I could not understand how the circle around the flower got cut off. I watched it happen during the vector cut.  I deleted that version and a made a second one. This one worked. The laser cutter first did the raster cut of the flower the did the vector cut of the two circles. I had a hard time pealing off the paper from the acrylic so for the second printing I pulled off some of the paper. As you can see from the second set of earring the one on the left had a white haze around the raster cut flower. I took them home and thought to wash them and it took the white haze away!. I also discovered that if I washed the others with the paper on it comes right off. I realize I still need to keep practicing with Inkscape as you can see my circle and flower are not centered.

Posted by Lucie deLaBruere at 8:17 PM
Email ThisBlogThis!Share to TwitterShare to FacebookShare to Pinterest