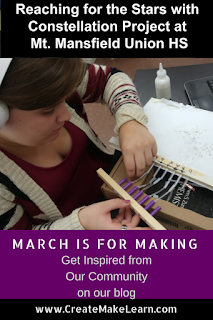 This post is part 2 of of a serendipitous story of professional learning that started this summer at Create Make Learn Summer Institute.  It was the story of two teachers growth as makers inspiring each other as they reached for the stars. Both of them have agreed to share their part of the story as a guest author. You can read Part 1 ~ Joanna's story in yesterdays post and scroll down to read Dan's guest author post below.

Thank you, Joanna and Dan, for sharing your unique expression of a similar idea as  guest bloggers for March is for Making #15 and #16.  I hope that reading about two very different and personalized maker projects of two connected educators pushing the limit inspires you to  push your own limits and reach for the stars.


“The patterns are simple, but followed together, they make for a whole that is wiser than the sum of its parts. Go for a walk; cultivate hunches; write everything down, but keep your folders messy; embrace serendipity; make generative mistakes; take on multiple hobbies; frequent coffeehouses and other liquid networks; follow the links; let others build on your ideas; borrow, recycle; reinvent. Build a tangled bank.”
― Steven Johnson, Where Good Ideas Come From: The Natural History of Innovation

I became inspired to literally “build a tangled bank” while sitting with my back to Joanna Elliot at the Generator in Burlington during Create Make Learn Summer Institute 2016, pondering ideas for a maker project.  After being introduced to the concept of a “paper circuit”, a “Japanese hole punch” and an ATtiny85 microprocessor (right),  I overheard Joanna discussing her idea for a  “paper circuit LED constellations with elementary students”  with colleagues, and had the idea to abandon (“put aside”) my current project and follow her lead with my older astronomy students. 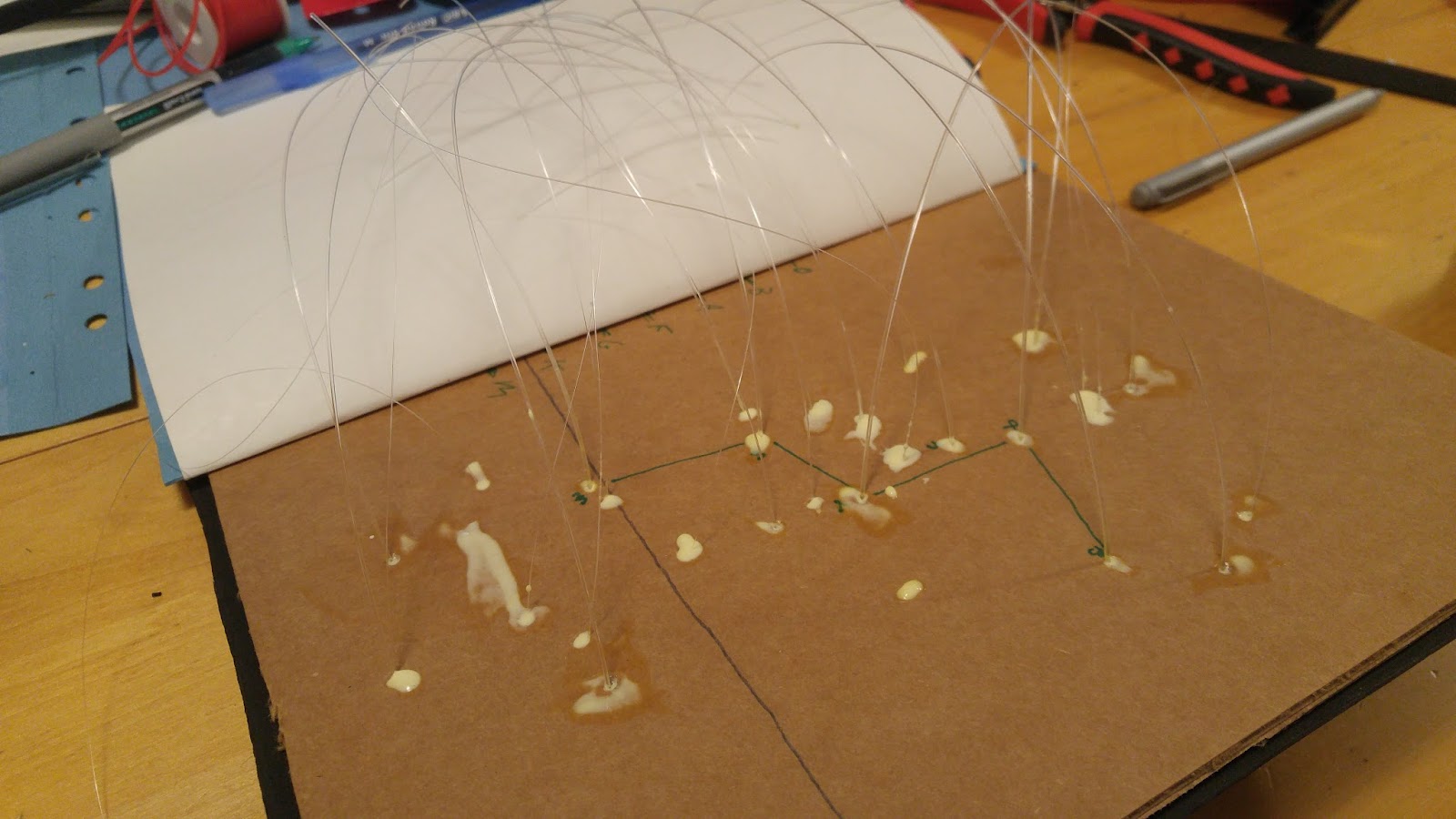 I wondered if it would be possible to have them construct an astronomy notebook in which pages might glow with constellations, the individual stars having colors and magnitudes that are relatively representative of the real thing.  Some fiber optic strands, a neopixel LED strip, an ATtiny85 microprocessor, and some black paper and glue and a month later, and I had a prototype that might work. 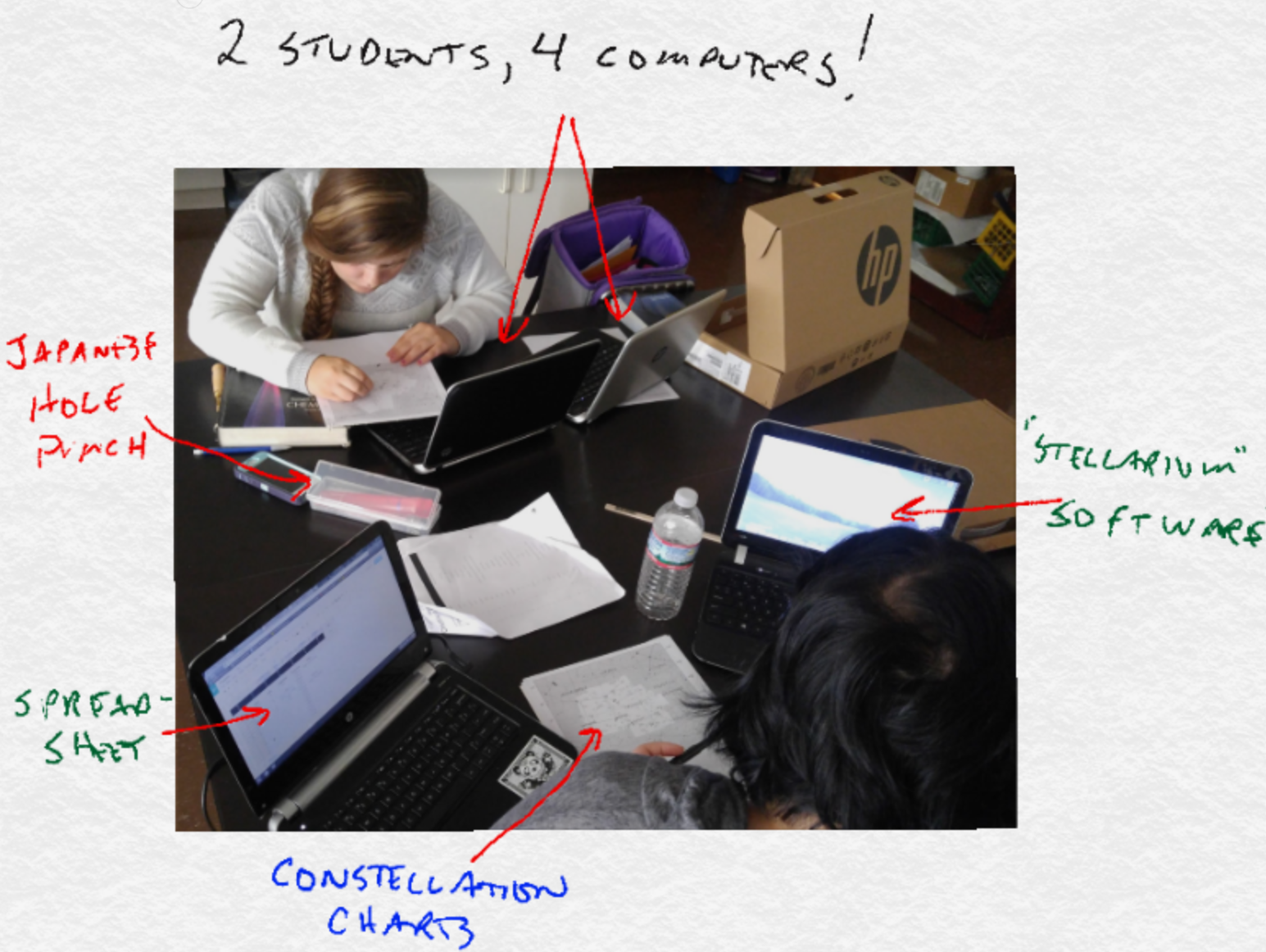 I was fortunate in having a tiny astronomy class (6 students) to experiment with, and they seemed quite willing to play along.  The prototype had to be improved, and the project took at least twice as long as I’d planned.  I had to make decisions about cutting out parts of the (traditional) astronomy curriculum, and to justify replacing it with watching glue dry and trying to solder a circuit (they are called ATtiny for a reason!) 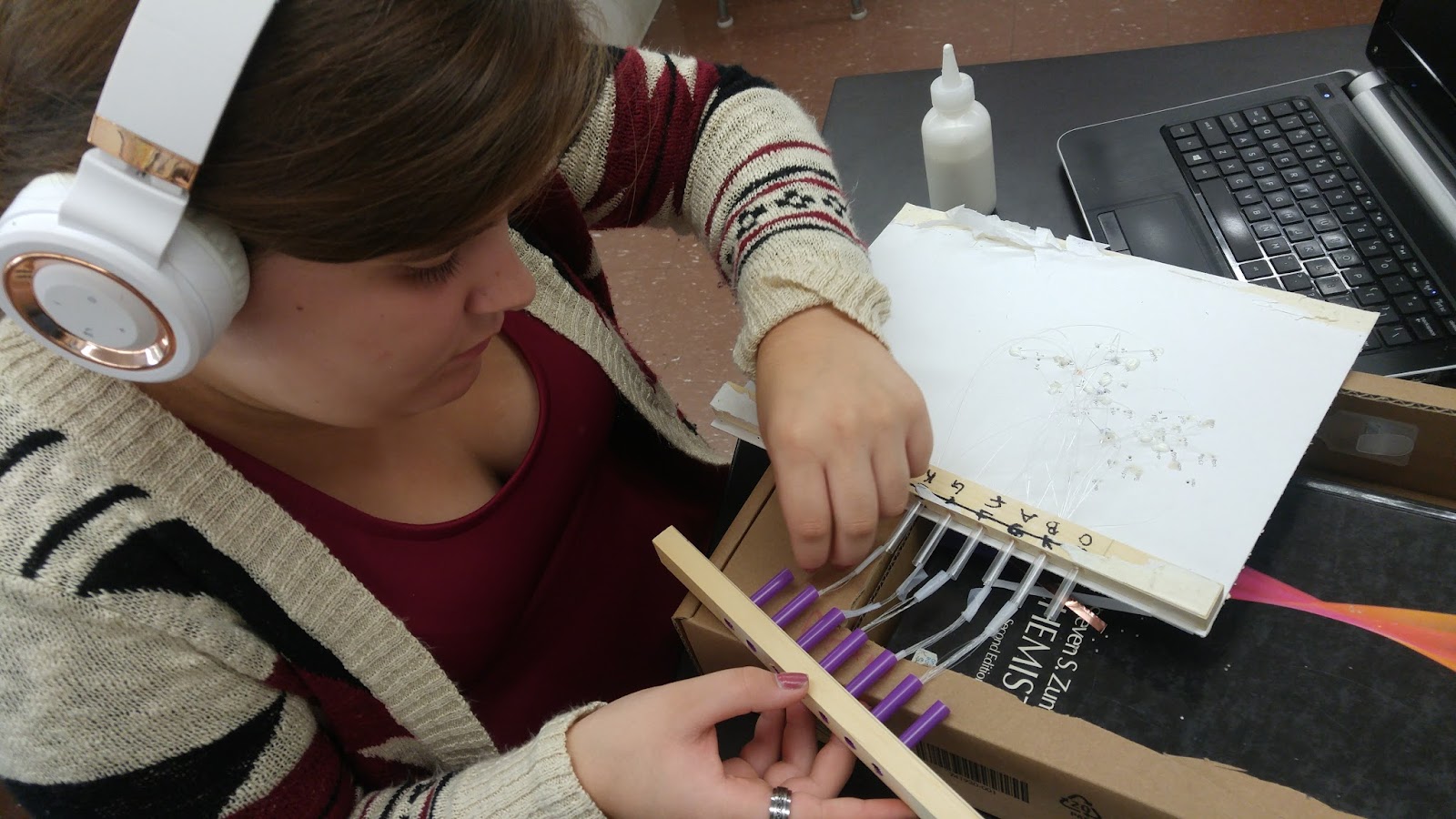 It became obvious that I had made the correct educational decision, however, when Chris, in the middle of 3 days of punching holes and tediously writing stellar classes and relative magnitudes next to them, called me over to say “...look at that ONE star in Draco!  There is SO MUCH you can know about it!  And that is just an average point of light up there.” 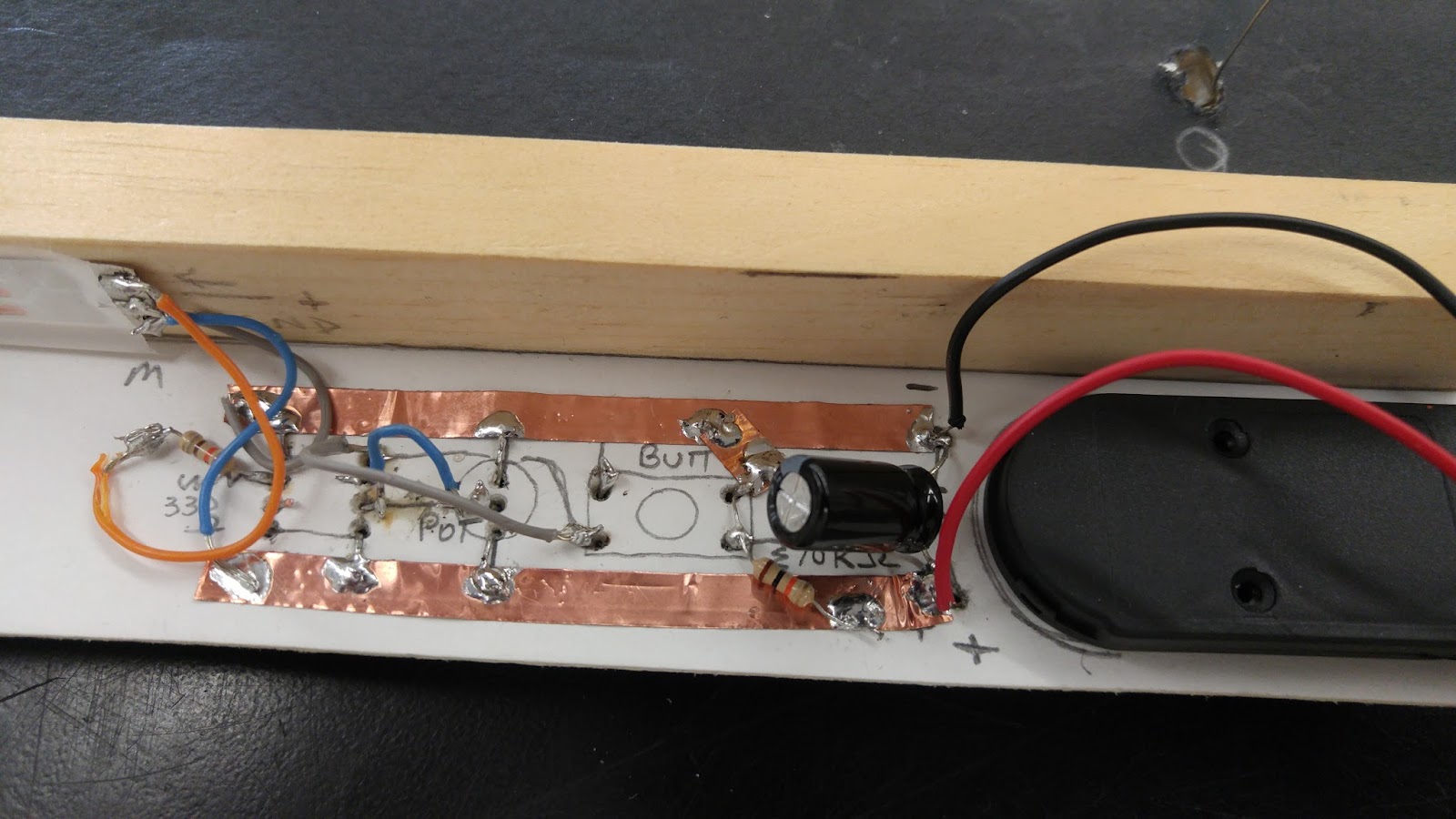 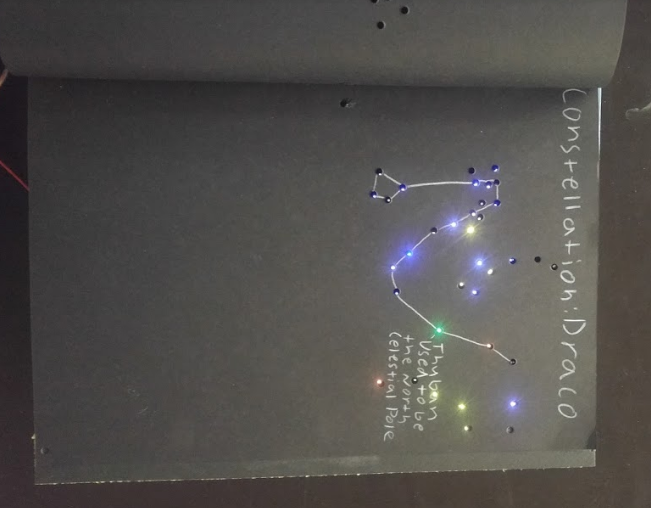 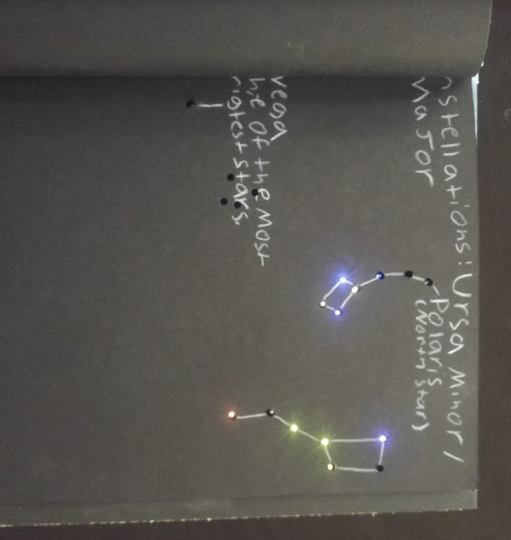 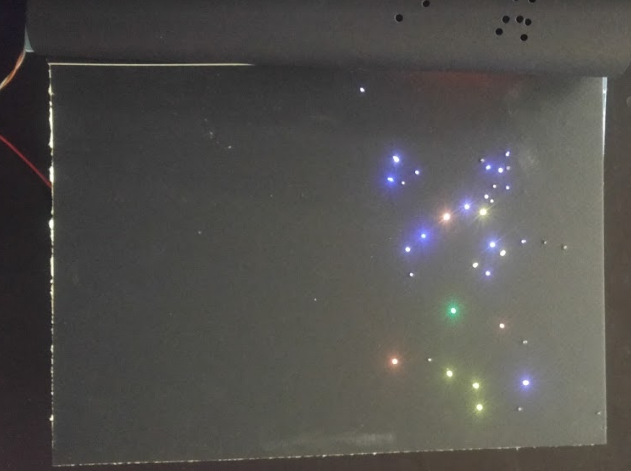 Later (but before anyone was actually finished gluing a tangle of fiber optic strands into the correct places through the reversed image of a constellation in a notebook with a small circuit in the spine) we had a “star party” during which I witnessed another of my students (Alex), without being asked to do so, pull aside a curious 10-year-old to point to an otherwise unremarkable star in Cassiopeia (Achird), and say:
that is exactly what our Sun would look like if we were orbiting that star -- they are identical in size and temperature, but 19 light-years apart.

Weeks of researching a small corner of the sky, gluing, drilling holes in wood, threading a tangle of plastic strands, programming a microprocessor, punching tiny holes in cardboard, re-gluing what had broken … it paid off in that moment, and will no doubt continue producing dividends for years.  The whole is indeed greater than the sum of its parts.  And, perhaps, Alex would not have said that if Joanna hadn’t been sitting behind me last August! 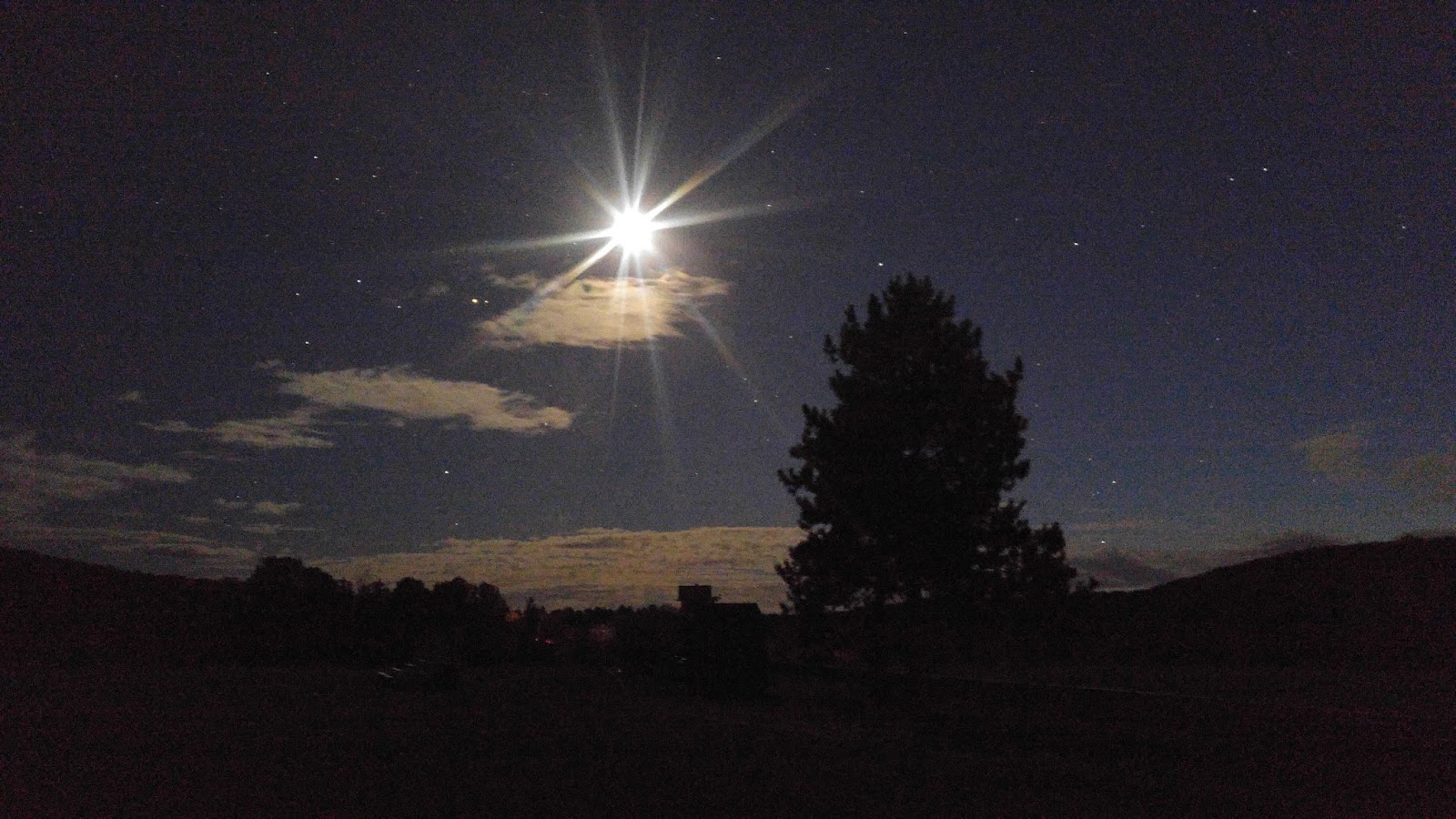 You can finPart 1 ~ Joanna's story here

Posted by Lucie deLaBruere at 8:28 PM
Email ThisBlogThis!Share to TwitterShare to FacebookShare to Pinterest